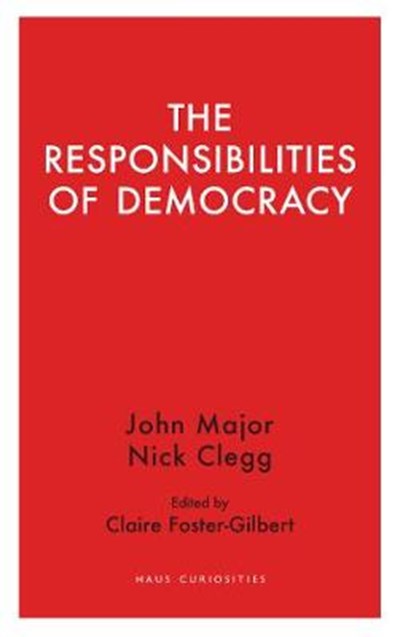 QTY
Add to Basket
Publisher: Haus Publishing
ISBN: 9781912208739
Number of Pages: 90
Published: 29/11/2019
Description Author Information Reviews
Democracy operates on consent. That means politicians have to argue their causes and win consensus. But democracy has its flaws, not least in the lack of efficiency in the decision-making process. Above all, democracy requires honesty: in facing up to challenges, acknowledging fears and dangers, and admitting the limitations of government. In this new book, two figures of the British political establishment, John Major and Nick Clegg, share their thoughts on where democracy is heading and how it can survive in the 21st century. Major writes of the qualities on which a healthy democracy depends, as he deplores the coarsening of political exchange. Clegg writes of the ways in which political language has always involved trading insults and argues that echo chambers, although now more sophisticated, are nothing new. Compromise, Clegg insists, is not betrayal, but the very substance of our politics and our democracy.The Responsibilities of Democracy explores the overall health of UK democracy, giving a balanced analysis of its values and flaws. It is also a clarion call to the electorate and politicians to nurture and protect the gentle values on which democracy depends. No reader seeking to understand democracy can afford to ignore this book.

Nick Clegg was Leader of the Liberal Democrats for eight years from 2007 and Deputy Prime Minister from 2010 to 2015. He is currently Vice-President for Global Affairs and Communications at Facebook. John Major served as Prime Minister of the United Kingdom and Leader of the Conservative Party from 1990 to 1997.