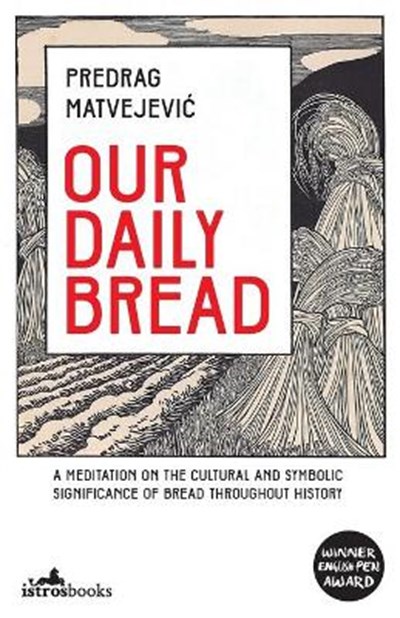 QTY
Add to Basket
Publisher: Istros Books
ISBN: 9781912545094
Number of Pages: 140
Published: 10/09/2020
Width: 14 cm
Height: 21.5 cm
Description Author Information Reviews
Our Daily Bread charmingly weaves together the customs, rituals, anecdotes, legends and sayings that tell the story of bread, from Mesopotamia, through Egypt, to the Far East, ancient Greece, ancient Rome, and the New World. Matvejevic shows how bread is depicted in literature and art (with beautiful illustrations) and examines especially closely the role of bread in the major world religions, drawing from the Bible, Talmud and Quran, but also at various apocryphal texts. In his seventh and last chapter, his narrative moves to the personal, explaining what motivated him to write this book; the lean years of his childhood during World War II and his father's detention in a German concentration camp. Warning about the pending threat of hunger in the "developed world," the book fittingly ends with a quote from the Russian anarchist Pyotr Kropotkin: "The question of bread must take precedence over all other questions."

Predrag Matvejevic (1932 -2017) was a Yugoslav writer and scholar born in Mostar, Bosnia. A literature scholar who taught at universities in Zagreb, Paris and Rome, he is best known for his 1987 non-fiction book Mediterranean: A Cultural Landscape, a seminal work of cultural history of the Mediterranean region which has been translated into more than 20 languages. Throughout his long academic career, he taught Slavic literature at the University of Paris III: Sorbonne Nouvelle and La Sapienza University of Rome.