The Last Foray in Lithuania 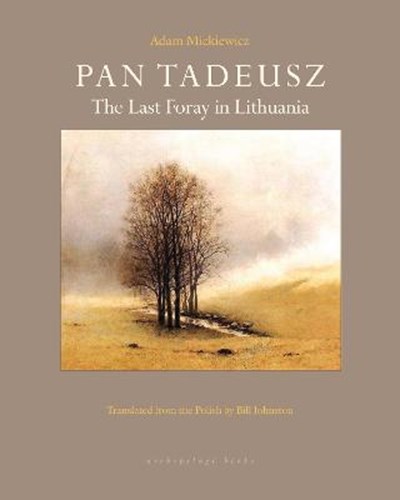 The Last Foray in Lithuania

Publisher: Archipelago Books
ISBN: 9781939810007
Number of Pages: 300
Published: 25/09/2018
Width: 15.2 cm
Height: 19.5 cm
Description Author Information Reviews
A towering achievement in European literature, Pan Tadeusz is the central work of the Polish literary canon, heralded for its lovingly detailed recreation of a bygone world. The traditions of the Polish gentry and the social and natural landscape of the Lithuanian countryside are captured in verse of astounding beauty, simplicity, and power. Bill Johnston's translation of this seminal text allows English-language readers to experience the richness, humour, and narrative energy of the original.

Adam Mickiewicz (1798 - 1855) was a Polish poet, dramatist, essayist, activist, and professor. He is regarded as a national poet in Poland, Lithuania, and Belarus. Born into Russian-occupied Lithuania, Mickiewicz was active in the struggle to win independence. He lived most of his life in exile in western Europe where he wrote freely of the occupation and taught Slavic literature. He died in Constantinople, where he had gone to help organize forces to fight against the Russians in the Crimean War. About the translator: Bill Johnston is a professor of Comparative Literature at Indiana University. His translations include Witold Gombrowicz's Bacacay; Magdalena Tulli's Dreams and Stones, Moving Parts, Flaw, and In Red; Jerzy Pilch's His Current Woman and The Mighty Angel; Stefan Zeromski's The Faithful River; and Fado and Dukla by Andrzej Stasiuk. In 1999 he received a National Endowment for the Arts Poetry Fellowship for Translation. In 2008 he won the inaugural Found in Translation Award for Tadeusz Rozewicz's new poems, and in 2012 he was awarded the PEN Translation Prize and Three Percent's Best Translated Book Award for Mysliwski's Stone Upon Stone.