Faith of a Father From Torment to Trust

Forging Our New Identity in Christ 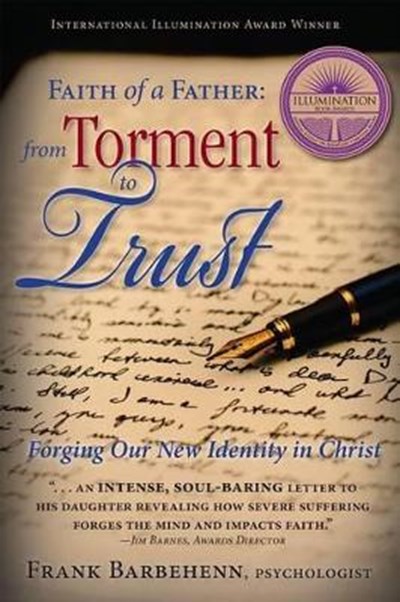 Faith of a Father From Torment to Trust

Forging Our New Identity in Christ

Publisher: Carpenter's Son Publishing
ISBN: 9781940262901
Number of Pages: 416
Published: 01/05/2015
Width: 15.2 cm
Height: 22.9 cm
Description Author Information Reviews
Using his thirty-five years in clinical practice, theological expertise, and professional self-analysis, Frank invites you on a totally unique ride. Structured as a father's open letter to his daughter Kristen, Frank's memoir explores his magnetic draw to faith...and the spiritual maelstrom that drew him to a profound yet deeply conflicted journey with Jesus Christ. The highly readable story of Frank's emerging faith in Jesus is a spellbinding dance among various forces in his life. In this most personal, page-turning expose, he courageously discloses how trauma shaped his life--nearly from the moment of his birth. Beginning in infancy, he was traumatized by an extraordinarily cold, emotionless alcoholic mother. From early childhood on, he was emotionally abused by an angry disabled father. Later, in midlife, he was twice traumatized by disabilities--disabilities that emerged as a result of his childhood. He reveals utterly intimate details of how his mind was forged through those traumas--driving his unchosen but painstaking quest for spiritual truth. It's the story of how one man found and embraced faith--not only the circumstances that engendered it, but the forces deep inside him that shaped his hypnotic draw to it. In poignant detail, he describes how that faith really looks--from the inside out--from deep within his own psyche. And it all culminates in a story Frank never fully shared with his daughter...until now...in Faith of a Father. Faith of a Father: From Torment to Trust is a 2016 Illumination Book Award Winner and Next Generation Indie Book Award Finalist.

The author is a licensed psychologist in Pennsylvania and theologically trained at Westminster Theological Seminary, Pennsylvania. He is a Clinical Fellow with the American Association for Marriage and Family Therapy and a Fellow with the American Psychotherapy Association. He specializes in relationship and trauma therapy, and the integration of faith and the Bible with the tough issues he faces clinically.