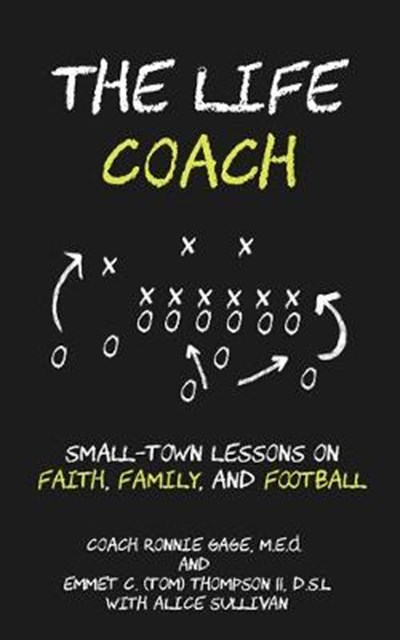 Publisher: Carpenter's Son Publishing
ISBN: 9781948484930
Number of Pages: 160
Published: 01/10/2019
Width: 15.2 cm
Height: 22.8 cm
Description Author Information Reviews
In small-town Decatur, Texas, football was life. And Ronnie Gage couldn't wait to become a Decatur Eagle. His football ability was decent, but he knew there wasn't a big demand for 150-pound center and safety, so he focused his career goals on the next best thing-coaching. This provided a way to give back to a sport, and a community, who had given him so much. Nearly forty years later, after countless winning seasons and championships, Coach Gage found himself in a unique situation, coaching an unusual player. When Emmet (Tom) Thompson joined the Austin College football team as a spry fifty-nine year-old kicker, Coach Gage had his doubts. But Thompson's dedication and tenacity spoke for himself on the field, and the two men forged an unshakable friendship built on their three loves-faith, family, and football. In The Life Coach, Coach Gage shares the important life lessons he's learned both on and off the field. Tom Thompson-kicking coach, author, and speaker-lends supporting anecdotes based on his many years in leadership roles. Together, they hope to inspire players and parents, coaches and crowds, to live a life of faith on and off the field, to make the most of every opportunity, and to have fun while doing it.

Ronnie Gage was raised in Decatur, Texas, and developed a love of sports as a young boy. After the death of his father, at the age of 13, he looked up to his coaches as role models and decided to become a coach as his vocation. Ronnie started as a middle school coach in 1976 and worked his way up the coaching ladder until he was hired for his first head job in 1987. In 1993, he led the Lewisville High School Fighting Farmers to their first state football championship and repeated it again in 1996. He recently retired after 42 years of coaching Texas high school football. His love of the profession led him to become an active member of the Texas High School Coaches' Association, and he served as the president of the state-wide organization of 18,000 members in 2004-2005. In 2009, he received the ultimate recognition of high school coaches in Texas by being inducted in the THSCA Hall of Honor. Over the years, Ronnie has coached in 5 different school districts in Texas and has returned to live in his hometown of Decatur, Texas, with his wife of 42 years, Stephanie. On November 14, 2009, Dr. Emmet C. (Tom) Thompson II kicked his way into the record books. At age 61, he became the oldest football player in NCAA history and the oldest NCAA football player to score a point when he kicked the PAT (Point After Touchdown) in the second quarter of the game between Austin College and Trinity University. It was a dream come true many years in the making. "Like many people, I grew up feeling as though I couldn't catch a break," muses the author, speaker, and NCAA football record holder. "With obstacles and setbacks from a very early age, I struggled to find meaning and purpose. As an adult with no real plan, my self-absorbed lifestyle led to divorce, financial stress, and physical injuries. But in time, I found my faith, my purpose, and my soulmate. If my story says anything, it is that it is never too late to re-imagine what you want your life to be." With degrees in Business Management, Kinesiology, Organizational Leadership, Strategic Leadership, and Teaching, Dr. Thompson's purpose is to encourage people of all ages to live healthy and fulfilled lives, to discover and reach their full potential, and to develop a deeper faith in the process Alice Sullivan is a ghostwriter, New York Times bestselling editor (11 times over), author coach, and speaker. A natural-born storyteller, she's written 34 books and edited over 1,300 titles since 2001. In addition to the NYT bestsellers, other books have achieved Amazon bestseller status and won several awards, such as Readers Choice, Living Now Book Award, and Nashville's Best Local Children's Book Award. Some of her more notable clients include Jen Hatmaker, Dave Ramsey, Donald Miller, Michael Hyatt, Mastin Kipp, Danette May, Shaquille O'Neal, Manny Pacquiao, George Foreman III, Lee Greenwood, Thomas Steinbeck, Pam Tillis, Bill Cosby, Tony Jeary, Bill Bennett, and Judge Andrew Napolitano. She's written books for Forbes, Hay House, Thomas Nelson Publishers (Harper Collins), Made for Grace Publishing, World Net Daily, Changing Lives Press, Carpenters Son Publishing/Clovercroft, and KN Literary Arts. Alice specializes in memoir, business/leadership, and self-help/personal growth. She helps her clients identify their goals and messages, creating engaging content to connect with their target markets. Her favorite projects are those that challenge her point of view, expand her knowledge, introduce her to inspiring authors, and add meaning to her life.