Dialogue and Disputation in the Zurich Reformation: Utz Eckstein's "Concilium" and "Rychsztag" 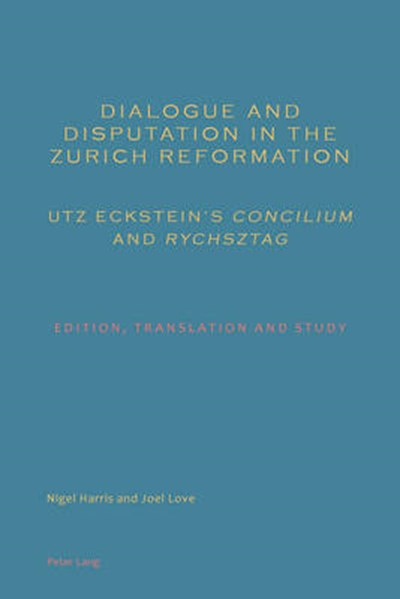 Dialogue and Disputation in the Zurich Reformation: Utz Eckstein's "Concilium" and "Rychsztag"

QTY
Add to Basket
Publisher: Peter Lang AG, Internationaler Verlag der Wissenschaften
ISBN: 9783034309608
Number of Pages: 485
Published: 15/08/2013
Width: 15 cm
Height: 25.5 cm
Description Author Information Reviews
This volume contains the first modern critical editions of Concilium (1525) and Rychsztag (1526), two vernacular verse dialogues by the Zurich-based Zwinglian author Utz Eckstein, together with translations of both into English prose. These works are of interest not just for their literary qualities (which differ markedly from those conventionally associated with 'Reformation dialogues'), but also because of what they reveal about Zwingli's theological and socio-political priorities in the mid-1520s. Along with many other aspects of the contemporary Swiss context, these features are examined in an introduction and in extensive elucidatory notes. An underlying thread of the authors' interpretation is that, for all their evident desire to express and establish Evangelical perspectives, the Concilium and Rychsztag make imaginative and constructive use of specifically Swiss traditions of dialogue, which were expressed, for example, both in the consultative decision-making processes of rural communities and in the increasingly influential procedures of the formalized urban disputation.

Nigel Harris is Reader in German at the University of Birmingham. His previous publications include editions of the Latin and German Etymachia (1994) and of the Lumen anime C and Ulrich Putsch's Liecht der sel (2007). Joel Love is a priest in the Church of England, currently working at Lancaster Priory. He studied French and German at Birmingham and Theology at Cambridge, and his doctoral dissertation on Utz Eckstein was successfully completed in 2008.