Old Jewish Commentaries on "The Song of Songs" II

The Two Commentaries of Tanchum Yerushalmi- Text and translation 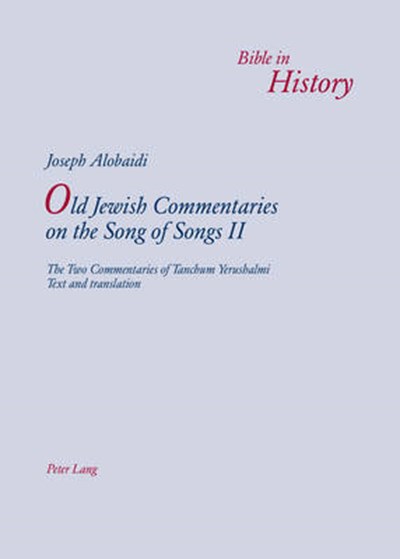 Old Jewish Commentaries on "The Song of Songs" II

The Two Commentaries of Tanchum Yerushalmi- Text and translation

eBook FAQ
Add to Basket
Publisher: Peter Lang AG, Internationaler Verlag der Wissenschaften
ISBN: 9783034315050
Number of Pages: 320
Published: 10/03/2014
Width: 15.5 cm
Height: 22 cm
Description Author Information Reviews
This book contains two commentaries on The Song of Songs by Tanchum Yerushalmi (c. 1220-1291), one of the best representatives of rational exegesis in the Middle Eastern rabbinical school of thought. His in depth knowledge of the Bible as well as his acquaintance with Greek philosophy, added to familiarity with his own Jewish tradition allowed him to write rich biblical commentaries. In so doing he showed himself as a worthy disciple of Saadia Gaon, Hai and Ibn Janah whom he mentions in his commentary on The Song of Songs. The extent of his knowledge can easily be seen in both his philological and philosophical commentaries on one of the most intriguing books of the Bible.

Joseph Alobaidi is professor of Bible Theology and Languages at the Pontifical Faculty of the Immaculate Conception, Dominican House of Studies, Washington, D.C. USA. His publications deals mainly with the Judeo-Arabic literature.