Rightly Dividing the Word of Truth

Studies in Honour of Metropolitan Kallistos of Diokleia 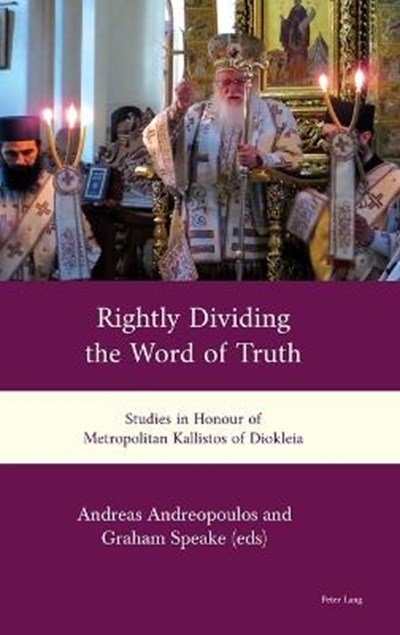 Rightly Dividing the Word of Truth

Studies in Honour of Metropolitan Kallistos of Diokleia

eBook FAQ
Add to Basket
Publisher: Peter Lang AG, Internationaler Verlag der Wissenschaften
ISBN: 9783034319973
Number of Pages: 264
Published: 10/11/2016
Width: 15 cm
Height: 22.5 cm
Description Author Information Reviews
Metropolitan Kallistos of Diokleia, formerly Timothy Ware, is unquestionably the best-known Orthodox theologian in the Western world today. The papers collected in this volume are designed to demonstrate the spread of his own interests and concerns and therefore range from the Desert Fathers to modern church dialogue, from patristics to church music, from the Philokalia to human "priesthood". In the course of a long career he has touched the lives of many people and there is a section of tributes concerned with his role as spiritual father, teacher, writer, pastor, theologian, and monk. In the epilogue the Metropolitan himself reflects on his many years as a pilgrim to Mount Athos. Most of the papers included in this volume were delivered at a conference convened by the Friends of Mount Athos at Madingley Hall, Cambridge, in 2015 in honour of Metropolitan Kallistos's eightieth birthday.

Andreas Andreopoulos is Reader in Orthodox Christianity at the University of Winchester. He has founded and directs the only fully distance Master's degree in Orthodox Theology. His publications include Gazing on God: Trinity, Church and Salvation in the Orthodox Church (2013); This is My Beloved Son: The Transfiguration of Christ (2012); The Sign of the Cross: The Gesture, the Mystery, the History (2006); Art as Theology: From the Postmodern to the Medieval (2006); and Metamorphosis: The Transfiguration in Byzantine Theology and Iconography (2005). Graham Speake is founder and Chairman of the Friends of Mount Athos and a Fellow of the Society of Antiquaries. His publications include Mount Athos: Renewal in Paradise (2nd edition, 2014), for which he was awarded the Criticos Prize, the Encyclopedia of Greece and the Hellenic Tradition, 2 vols (2000), and a number of edited volumes on Athonite history and spirituality. He was received into the Orthodox Church on Mount Athos and is a spiritual child of Metropolitan Kallistos.