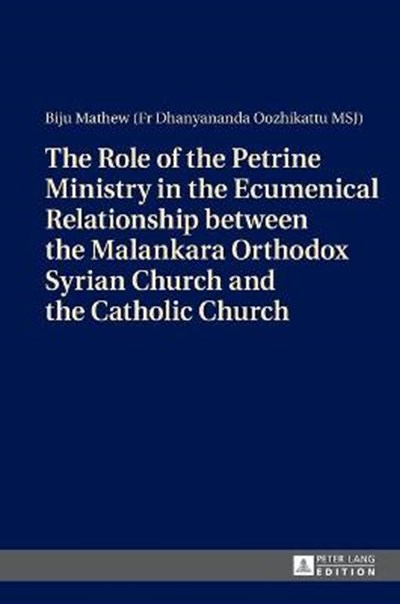 eBook FAQ
Add to Basket
Publisher: Peter Lang AG
ISBN: 9783631654606
Number of Pages: 451
Published: 26/11/2014
Width: 14.8 cm
Height: 21 cm
Description Author Information Reviews
This work deals with the role of the Petrine ministry in the ecumenical relationship between the Malankara Orthodox Syrian Church and the Catholic Church. The Malankara Orthodox Syrian Church traces her origin to the Church of St Thomas Christians, founded by St Thomas, the Apostle who reached the south Indian state of Kerala in 52 AD. The book explores the Ecclesiologies of the Malankara Orthodox Syrian Church, the St Thomas Christians of India and the Catholic Church from a dogmatic-juridical-historical perspective. The author tries to mediate between the two Churches in order to support them in the reviewing process of their history and Ecclesiology and re-establishing the unity for which Jesus Christ prayed: "Holy father, protect them in your name that you have given me, so that they may be one, as we are one" (Jn 17, 11). The author in his role as mediator makes a few suggestions for solving the problems related to the concept of the Petrine ministry on a universal level in the light of the Communion Ecclesiology of Vatican II, the studies of the various unofficial ecumenical dialogue commissions and the analysis of the experience of the Syro Malabar Church, one of the 22 sui iuris Churches in the Catholic Church.

Biju Mathew (Fr Dhanyananda Oozhikattu MSJ) is a religious priest who belongs to the congregation of the Missionaries of St John the Baptist. He hails from the south Indian state of Kerala and belongs to the Syro Malabar Church. He did his PhD studies in Dogmatic Theology with a specialization in Ecclesiology at Sankt Georgen Graduate School of Philosophy and Theology in Frankfurt (Germany). During his doctoral studies Biju Mathew was elected Superior General of the MSJ congregation in 2012 and serves the congregation and the Church in Kloster Heilig Kreuz - the Generalate of the congregation in Leutesdorf/Rhein, Germany.