Torah in the Fifth Book of the Psalter 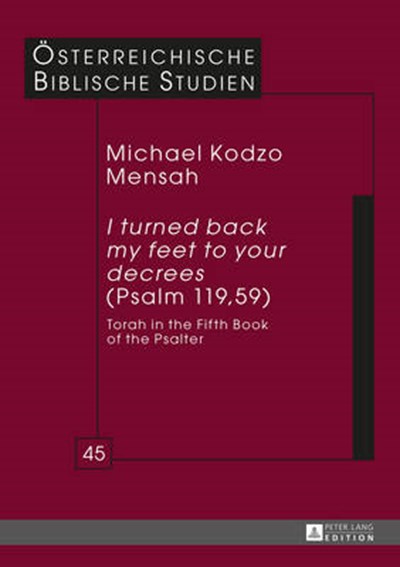 Torah in the Fifth Book of the Psalter

eBook FAQ
Add to Basket
Publisher: Peter Lang AG
ISBN: 9783631672297
Number of Pages: 370
Published: 25/04/2016
Width: 17 cm
Height: 24 cm
Description Author Information Reviews
Scholars have described Psalm 119 as the "crux criticorum" of the Fifth Book of the Psalter (Pss 107-150). While the length of the psalm and its insistence on the question of YHWH's Torah are basic indices pointing to its importance in the Book, the question of its message, that is, the logical development of its theme has remained an exegetical problem. The author proposes a solution, namely, that Psalm 119 is structurally arranged to show the Psalmist's own experience of straying and returning to YHWH's Torah. The resolution of the problem has implications for understanding the organisation of the Fifth Book and for the place of psalms such as 111 and 147, which also reflect on the theme of Torah in the final Book of the Psalter.

Michael Kodzo Mensah is a diocesan priest of the Catholic Archdiocese of Accra, Ghana. He studied Theology at the St. Peter's Regional Seminary, Pedu, and earned the S.S.L. and S.S.D. from the Pontifical Biblical Institute, Rome.