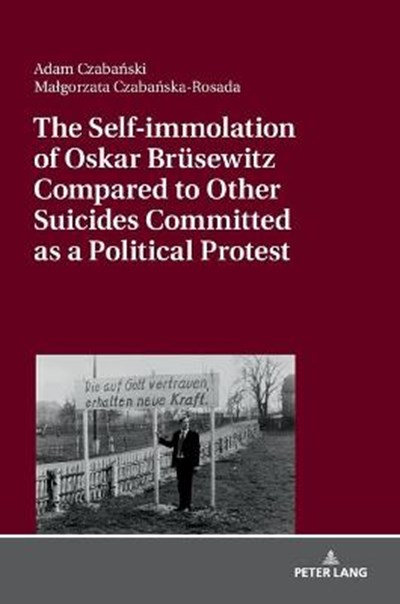 QTY
Add to Basket
Publisher: Peter Lang AG
ISBN: 9783631674215
Number of Pages: 150
Published: 31/01/2018
Width: 14.8 cm
Height: 21 cm
Description Author Information Reviews
This book studies the phenomenon of altruistic suicide which was a form of political protest. The authors investigate the self-immolation of German pastor Oskar Brusewitz and compare it with other politically motivated suicides. They portray both life and pastoral activity of Brusewitz and analyse the motives of his suicide. Furthermore, they evaluate the judgement of this tragic event by confreres in faith and other witnesses. Besides the thorough analysis of Oskar Brusewitz's case, the book inspects the genesis of self-immolation and locates it in the tradition of Buddhism and Hinduism. It depicts cases of self-immolations in Vietnam, the USA, India, Tibet, China, Iran, and particularly in Middle-Eastern Europe (Czechoslovakia, Poland and Lithuania). The analysis also covers cases of self-immolations that occurred during the Arab Spring (2011-2012) and in Bulgaria in 2013.

Adam Czabanski is a Professor and Head of the Health Sociology and Social Pathologies Unit at the Department of Social Sciences at the Karol Marcinkowski Medical University in Poznan. His research interests focus on phenomena connected with sociology of health, sociology of medicine and social pathologies. Malgorzata Czabanska-Rosada is an Assistant Professor at the Faculty of Humanities of the Jacob of Paradyz Academy in Gorzow Wielkopolski. She conducts multi-faceted studies of literary, magazine-writing and documentary artefacts made in the areas of the German-Polish border. Her academic interests include the phenomenon of the outsider in the broad area of socio-cultural research.