Unknown God, Known in His Activities

Incomprehensibility of God during the Trinitarian Controversy of the 4th Century 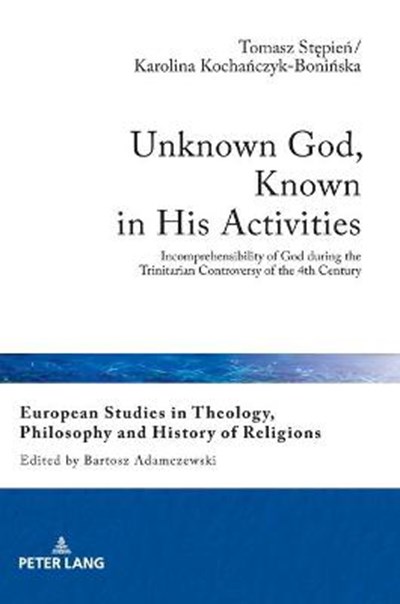 Unknown God, Known in His Activities

Incomprehensibility of God during the Trinitarian Controversy of the 4th Century

eBook FAQ
Add to Basket
Publisher: Peter Lang AG
ISBN: 9783631757369
Number of Pages: 254
Published: 17/07/2018
Width: 14.8 cm
Height: 21 cm
Description Author Information Reviews
What can man know about God? This question became one of the main problems during the 4th-century Trinitarian controversy, which is the focus of this book. Especially during the second phase of the conflict, the claims of Anomean Eunomius caused an emphatic response of Orthodox writers, mainly Basil of Caesarea and Gregory of Nyssa. Eunomius formulated two ways of theology to show that we can know both the substance (ousia) and activities (energeiai) of God. The Orthodox Fathers demonstrated that we can know only the external activities of God, while the essence is entirely incomprehensible. Therefore the 4th-century discussion on whether the Father and the Son are of the same substance was the turning point in the development of negative theology and shaping the Christian conception of God.

Tomasz Stepien is Associate Professor at the Faculty of Theology, Cardinal Stefan Wyszynski University in Warsaw. He researches and publishes on Ancient Philosophy, Early Christian Philosophy, Natural Theology and Philosophy of Religion. Karolina Kochanczyk-Boninska is Assistant Professor at the Institute of the Humanities and Social Sciences, War Studies University in Warsaw. She researches and publishes on Early Christian Philosophy and translates patristic texts.