Sheila Upjohn on Julian of Norwich

What sparked your interest in Julian of Norwich and when did your journey with her begin?
Even though I’d lived all my life in Norwich and studied Middle English for my degree at London University I’d barely heard of Julian of Norwich until her 600th anniversary in 1973 when I was a reluctant member of a committee to celebrate her 600th anniversary. The other members were priests, monks and nuns, who knew all about her. I couldn’t believe that a mediaeval woman who lived in one room all her life would have much of interest to say, but grudgingly thought I’d better read her book. I bought a secondhand copy for £1 and began to read. I haven’t stopped reading it since.

In what ways is she a mystic for our times?
Mystics transcend centuries – they are for all times. They have stereoscopic sight and see more than we do. Julian had to grapple with the fact that while the Church told her that we are sinners who deserve God’s anger, she could see no anger in God. And she came to accept that ‘both of these are true’ (Chapter 82). I think that today we are in danger of adopting non-negotiable positions. We have to recognise that because we are sure we are right, it does not mean that people with different views are necessarily and absolutely wrong. Julian’s hard-won understanding is never either/or, but always both/and.

Mark Oakley in his review described 'The Way of Julian of Norwich' as ‘distilled and homely’. What kind of steer did you want to give your reader?
Julian had a direct experience of God, and tells us she ‘knew no letter’ when she was shown these deep mysteries. But she was a clear thinker and a born writer and so she recorded them, meditated on them and set them down as well as ever she could. She had only the simplest of words to use: drops of water falling from the eaves, the fish-scales of herring, women hanging up clothes to dry. Often she has to recognise what she had been shown goes beyond words and says ‘all the showings are full of secret things.’ It took her a lifetime to write her book, so take it slowly and savour it day by day. I am still finding things in it I never saw before.

Tell us about your book 'In Search of Julian of Norwich' and about the new edition of 'All Shall Be Well' out in July.
It wasn’t just me who knew little about Julian when that 600th anniversary was celebrated in 1973. Most people had never even heard of her. So when Robert Llewelyn came to Norwich to be a praying presence in Julian’s cell three years later, the rector Michael McLean encouraged him to compile a booklet of daily readings to make her book better known. The result was Enfolded In Love. To our surprise it became an international best-seller. It has now sold more than 120,000 copies and been translated into six languages, and led to a series of daily readings from spiritual writers edited by Robert Llewelyn. [The royalties gave us the money to set up the Julian Centre.]

Enfolded in Love nearly didn’t make it into print on its intended publication date 8th May 1980, the day Julian was included in the Church of England Calendar. Robert Llewelyn had used a modern translation, and didn’t realise it was copyright. He found out eight days before the deadline. The solution was to make a new translation. I knew Middle English. After that headlong dash I decided to make a translation of the whole book at a leisurely pace, and then see if I could make cuts and lay it out for daily reading. The result was All Shall Be Well first published in 1992 and now to be re-issued in July.

After the success of Enfolded In Love the publishers recognised there was a need for a clear and simple introduction to Julian, and kept badgering the rector of St Julian’s to write one. He knew he wasn’t the right person and managed to push the job on to me. So that’s how In Search of Julian of Norwich came to be written. It was published in 1989 and is still in print.

Although written as a suitable Lent book does the framework of 'The Way of Julian of Norwich' work all year round?
Julian’s book contains enough spiritual nourishment for a lifetime, and it is far too rich a feast to digest at a single sitting. While Enfolded in Love offered bite-size portions and All Shall Be Well served up a daily meal, the aim of The Way of Julian of Norwich is to provide a menu for the week. There are six of them, each made with ingredients taken from one of Julian’s main themes. These weekly meals are especially sustaining in Lent, when we cut down on bodily food, but they are nutritious at any time of the year, particularly during the days outside the special Seasons when spiritual energy tends to sink low and needs a boost. Julian’s words speak intimately when they are read in solitude and are enriching when read with a group.

In addition to her famous saying ‘All Shall Be Well’, what other sayings have personal resonance for you?
My favourite quote is 'I saw that nothing happens by chance, but by the far-sighted wisdom of God. If it seems like chance or accident to us is it because we are blind and blinkered. For the things planned by God since before the world began (which he rightly and gloriously and continually shapes to the best end as they come about) come upon us suddenly and take us unawares. And so in our blindness and short-sightedness we say they are accidents or chance. But to our Lord God they are not so'. Chapter 11. I have found this true time and time again, and often smile over it with Julian friends who also have found it to be true.

Here’s another quote I cherish: 'And after this, he allows some of us to fall harder and more painfully than we ever did before, it seems to us. And then we — who do not know everything — think all our work is wasted. But it is not so. We need to fall, and we need to see we have fallen. For if we never fell, we should never know how poor and weak we are on our own — nor should we ever fully know the wonderful love of our Maker' Chapter 61. This ties up with 'nothing happens by chance' and also with 'sin is behovely'. Without his terrible denial of Christ, Peter could never have known the totality of his forgiveness and the strength of God’s love. The purpose of failure, and the fact that sin is behovely, is at the heart of Julian’s book.

All of the books mentioned in Sheila's piece, 'Enfolded in Love' by Robert Llewellyn, and her three books 'The Way of Julian of Norwich', 'In Search of Julian of Norwich' and 'All Shall be Well' are all on offer at 10% off. Visit our promotion here: https://chbookshop.hymnsam.co.uk/features/julian-of-norwich 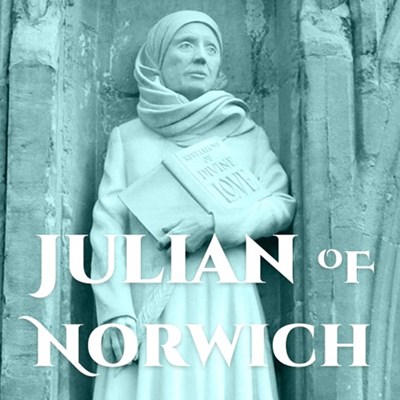