Phenomenology of the Devout Life

A Philosophy of Christian Life, Part I 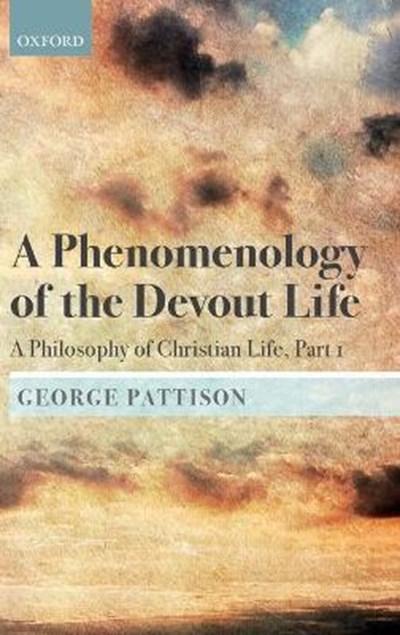 Phenomenology of the Devout Life

A Philosophy of Christian Life, Part I

eBook FAQ
Add to Basket
Publisher: Oxford University Press
ISBN: 9780198813507
Number of Pages: 232
Published: 07/11/2018
Width: 16.4 cm
Height: 24.2 cm
Description Author Information Reviews
A Phenomenology of the Devout Life is the first part of a three-part work, A Philosophy of Christian Life. Rather than approaching Christianity through its doctrinal statements, as philosophers of religion have often done, the book starts by offering a phenomenological description of the devout life as that is set out in the teaching of Francois de Sales and related authors. This is because for most Christians practice and life-commitments are more fundamental than formal doctrinal beliefs. Although George Pattison will address the metaphysical truth-claims of Christianity in Part three, the guiding argument is that it is the Christian way of life that best reveals what these beliefs really are. As the work is a philosophical study, it does not presuppose the truth of Christianity but assumes only that there is a humanly accessible meaning to the intention to live a devout life, pleasing to God. This can be said to find expression in a certain view of selfhood that emphasizes the dimensions of feeling and will rather than intellect and that culminates in the experience of the annihilation of self. This is a model of selfhood deeply opposed to contemporary models that privilege autonomous agency and the devout life is therefore presented as offering a corrective to extreme versions of the contemporary view.

George Pattison is 1640 Professor of Divinity at the University of Glasgow and a Visiting Professor at the University of Copenhagen. He has published extensively in modern theology, especially relating to Hegel and his nineteenth and twentieth- century interpreters and critics-notably Kierkegaard and Heidegger, and with a particular interest in Russian religious thought. His publications include Thinking about God in an Age of Technology (2005), God and Being (2011), Kierkegaard and the Quest for Unambiguous Life (2013), and Eternal God/Saving Time (2015). He is the co-editor of The Oxford Handbook of Kierkegaard (with John Lippitt; 2013) and The Oxford Handbook of Theology and Modern European Thought (with Nicholas Adam and Graham Ward; 2013).