Nemesius of Emesa on Human Nature

A Cosmopolitan Anthropology from Roman Syria 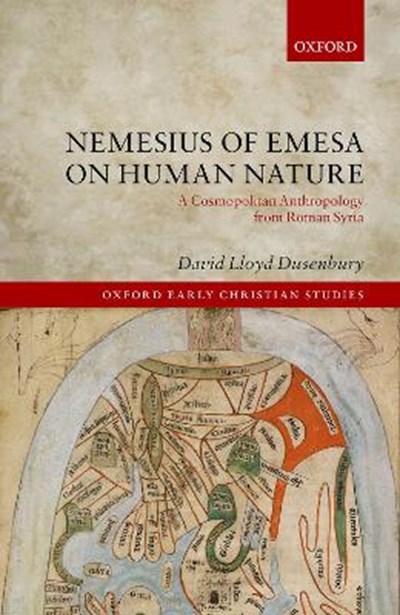 Nemesius of Emesa on Human Nature

A Cosmopolitan Anthropology from Roman Syria

eBook FAQ
Add to Basket
Publisher: Oxford University Press
ISBN: 9780198856962
Number of Pages: 240
Published: 20/08/2021
Width: 15.8 cm
Height: 24.3 cm
Description Author Information Reviews
Nemesius of Emesa's On Human Nature (De Natura Hominis) is the first Christian anthropology. Written in Greek, circa 390 CE, it was read in half a dozen languages-from Baghdad to Oxford-well into the early modern period. Nemesius' text circulated in two Latin versions in the centuries that saw the rise of European universities, shaping scholastic theories of human nature. During the Renaissance there were numerous print editions helping to inspire a new discourse of human dignity. David Lloyd Dusenbury offers the first monograph in English on Nemesius' treatise. In the interpretation offered here, the Syrian bishop seeks to define the human qua human. His early Christian anthropology is cosmopolitan. He writes, 'Things that are natural are the same for all.' In his pages, a host of texts and discourses-biblical and medical, legal and philosophical-are made to converge upon a decisive tenet of Christian late antiquity: humans' natural freedom. For Nemesius, reason and choice are a divine double-strand of powers. Since he believes that both are a natural human inheritance, he concludes that much is 'in our power'. Nemesius defines humans as the only living beings who are at once ruler (intellect) and ruled (body). Because of this, the human is a 'little world', binding the rationality of angels to the flux of elements, the tranquillity of plants, and the impulsiveness of animals. This compelling study traces Nemesius' reasoning through the whole of On Human Nature, as he seeks to give a long-influential image of humankind both philosophical and anatomical proof.

David Lloyd Dusenbury is Postdoctoral Research Fellow at the Hebrew University of Jerusalem.