Discoveries in the Judaean Desert XXXVII 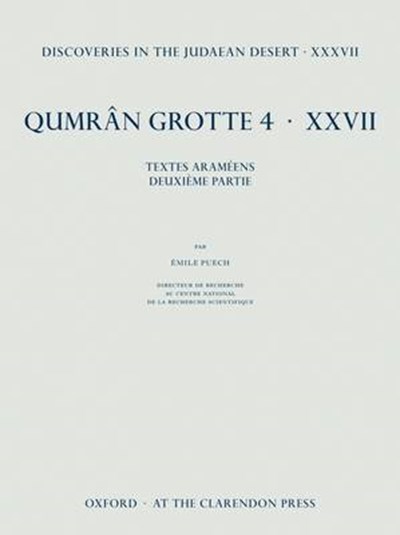 Discoveries in the Judaean Desert XXXVII

Publisher: Oxford University Press
ISBN: 9780199550043
Published: 04/12/2008
Description Author Information Reviews
This volume (in French) contains the editio princeps of the second part (4Q550-583) of the Aramaic texts from Cave 4 at Qumran which were originally assigned to Pere Jean Starcky (4Q521-578). The first part of the Aramaic texts were published in volume XXXI of the Discoveries in the Judaean Desert series, while the Hebrew texts were published in volume XXV. These Aramaic and Hebrew texts include primarily parabiblical and pseudepigraphical compositions, often named 'Apocryphon', 'Testament', 'Pseudo-', or 'Visions'. They reflect the interest in biblical themes characteristic of Second Temple period Judaism, and exhibited in many of the Qumran compositions.

Emile Puech is Director of Research at the Centre National de la Recherche Scientifique and works at the Ecole Biblique et Archaeologique Francaise, Jerusalem. He is also editor of volumes XXV and XXXI and co-editor of volume XXII in the series.

As the sole editor of three volumes in the DJD Series Professor Puech is one of the most prolific contributors to this prestigious series, and the scholarly community owes him a huge debt of gratitude for his painstaking and highly skilled labour over the course of several decades. Charlotte Hempel. The Journal of Theological Studies.