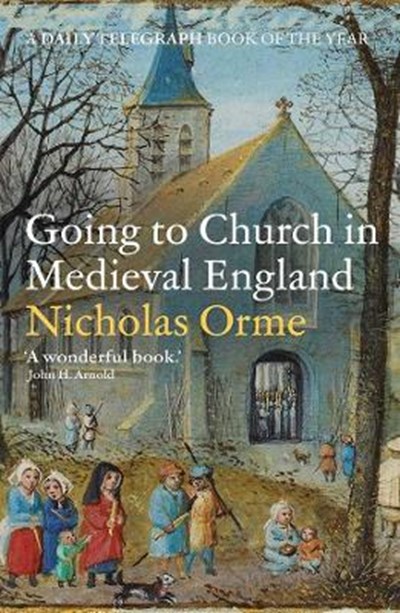 An engaging, richly illustrated account of parish churches and churchgoers in England, from the Anglo-Saxons to the mid-sixteenth century Parish churches were at the heart of English religious and social life in the Middle Ages and the sixteenth century. In this comprehensive study, Nicholas Orme shows how they came into existence, who staffed them, and how their buildings were used. He explains who went to church, who did not attend, how people behaved there, and how they-not merely the clergy-affected how worship was staged. The book provides an accessible account of what happened in the daily and weekly services, and how churches marked the seasons of Christmas, Lent, Easter, and summer. It describes how they celebrated the great events of life: birth, coming of age, and marriage, and gave comfort in sickness and death. A final chapter covers the English Reformation in the sixteenth century and shows how, alongside its changes, much that went on in parish churches remained as before.

Nicholas Orme is emeritus professor of History at Exeter University. He has written more than thirty books on the religious and social history of England, including Medieval Children, Medieval Schools, Medieval Pilgrimage, and The History of England's Cathedrals.

"Orme's book, a vast intricate mosaic resting atop a mountain of research, is often funny, often moving, and always fascinating. You finish it with a real feeling for the lives of normal people (so often absent from history books) in a world of great contrasts...a world of humour, and of sadness; a world not entirely unlike our own."-Duncan Morrison, The Daily Telegraph "Christmas is the time of year when people are most likely to attend divine service, and Going to Church in Medieval England [...] tells us how they did it 800 years ago...Orme also describes how the churches that punctuate our landscape came about, and who ran them."-Simon Heffer, The Daily Telegraph '2021's Best Histories' "Eye-opening...Orme deftly shows how church language became part of everyday English."-Harry Mount, Spectator "Prof Orme's beady eye for lively human interest makes him very good company."-Ysenda Maxtone Graham, Country Life "Orme explains in impressive detail what churches (and church-going) were like in the Middle Ages."-The Week "A distinguished and highly accessible contribution to the unfolding scholarly landscape of this subject...Orme is known for his scholarship on medieval children. Despite the fact that he concludes that they are an elusive presence, he provides some fascinating details."-Kitty Turley, The Tablet "It is perhaps the particular virtue of this book that its author is every bit as interested in the everyday life of the church as he is in the sacred highpoints of sacred theatre and the beauties of medieval architecture...This is, in other words, a complete picture of a whole world."-William Whyte, History Today "Orme is an authoritative and accessible guide, and this exhaustive and lavishly illustrated study is a must-read."-Katherine Harvey, Church Times "Nicholas Orme writes with an engaging lightness of touch while clearly laying out the functions, use and management of medieval parish churches. The result is so skilfully, successfully and thoroughly executed that it belies the complexity and scope of the task."-John Jenkins, Times Literary Supplement "Professor Orme's detailed, but very readable (and affordable) book, brings together recent scholarship to provide an accessible account of how people worshipped and practised religion in their local church...It is definitely a 'must have' addition to any medievalist's bookshelf."-Richard Halsey, Friends of Friendless Churches "The book provides an accessible account of what happened in the daily and weekly services and how churches marked the seasons of Christmas, Lent, Easter and summer."-Methodist Recorder "Nicholas Orme provides a vivid and detailed look at what it was actually like to attend church in medieval times - the sights, sounds and smells. He includes delightful details about seating arrangements, how the interior of the church would have looked, what happened to those who didn't attend church, and much more...An engaging read that will stay with you long after you finish the last page."-Rachel Bellerby, Family Tree Magazine "Yale has served Orme especially well, with superb colour illustrations integrated straight into this text...His subject is inherently visual in all its aspects, from the architecture of church buildings to the teeming daily activity that went on inside and around them."-Diarmaid MacCulloch, London Review of Books "Orme's mastery of the subject shines through soon enough; given his long and distinguished career, this is hardly a surprise. With a light and accessible touch he leads his readers through the give-and-take of churchgoing from the origins of the parish among the newly converted Anglo-Saxons to the role it inevitably played in the implementation of the Reformation at local level...The depth and detail of his work lies in his characters, both saints and sinners with all their wants, needs, foibles, hopes, and fears."-Serenhedd James, The Critic 'Alert throughout to change across time, the complexities of sources, and the variety of past experience, Nicholas Orme has written a wonderful book. With great clarity and insight, he captures the human and material reality of quotidian Christian worship across the middle Ages.'-John H. Arnold, author of Belief and Unbelief in the Middle Ages 'Drawing on both surviving churches and contemporary literature and attentive to gender, status, and geography, Orme explores what ordinary men and women saw, heard, and expe-rienced when they attended church.'-Katherine L. French, Professor of History, University of Michigan 'What actually happened in a medieval church? What was medieval worship like? Turn to this book, and you'll find answers to all the questions you'll ever ask.'-Professor Nigel Saul, author of Richard II 'For many years Nicholas Orme has been enlightening readers with incisive appreciations of the religious and social institutions of medieval England. Beautifully illustrated throughout, this study brings home to readers the reality of formal Christian witness as experienced by England's medieval parishioners.'-Dr Roger Bowers, University of Cambridge