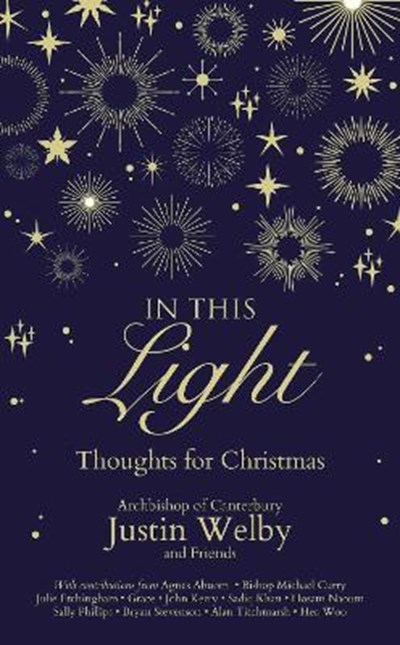 Join now Find out more
Publisher: HarperCollins Publishers Inc
ISBN: 9780310100300
Number of Pages: 128
Published: 01/11/2018
Width: 2.5 cm
Height: 2.5 cm
Description Author Information Reviews
What a beautiful, genuine, moving book. Reminds us of what's important in life. Dip into this, and get strength for the day. For when you can feel the darkness, use this book as light. Jeremy Vine Journalist and Author A time for reflection Christmas should be a time of peace, togetherness and celebration; yet it can leave all too many of us feeling overwhelmed by loneliness, stress and worry. In This Light is a timely collection of thoughtful meditations. The Most Revd Justin Welby, Archbishop of Canterbury, leads contributions from celebrities, business leaders, athletes, politicians and others, whose names you might not know but whose stories you will come to love. Alan Titchmarsh, Sally Philips, Bear Grylls, Afua Hirsch, Bishop Michael Curry, Secretary John Kerry, Dany Cotton, Elif Shafak, Jo Malone and Sally Lloyd-Jones--among others--offer their thoughts and insights as we reflect on this time of year. In a world that often seems in turmoil, these personal essays invite us to remember and rejoice in the true, timeless spirit of Christmas. The Archbishop of Canterbury will donate all royalties received from this book, in equal parts, to support these wonderful organisations: Caring for Ex-Offenders, part of the ministry of Holy Trinity Brompton Equal Justice Initiative The Melanesian Mission Charis Tiwala

The Most Revd Justin Welby was ordained in 1992 after an 11-year career in the oil industry. He spent his first 15 years serving in Coventry diocese, often in places of significant deprivation. In 2002 he was made a Canon of Coventry Cathedral, where he jointly led its international reconciliation work. During this time, he worked extensively in Africa and the Middle East. Archbishop Justin has had a passion for reconciliation and peace-making ever since. He was Dean of Liverpool Cathedral from 2007 to 2011 and Bishop of Durham from 2011 to 2012, before being announced as the 105th Archbishop of Canterbury in late 2012. On 21st March 2013, he was installed as Archbishop of Canterbury in a service at Canterbury Cathedral. On taking office, Archbishop Justin announced three personal priorities for his ministry. The first is a renewal of prayer and Religious life throughout the church. The second is seeking reconciliation within the church, and supporting the Church in its role as a peacemaker. The third is encouraging every Christian to share their faith and see themselves as a witness to Jesus Christ. These priorities are central to everything the Archbishop does.