Jeremiah, Zedekiah, and the Fall of Jerusalem

A Study of Prophetic Narrative 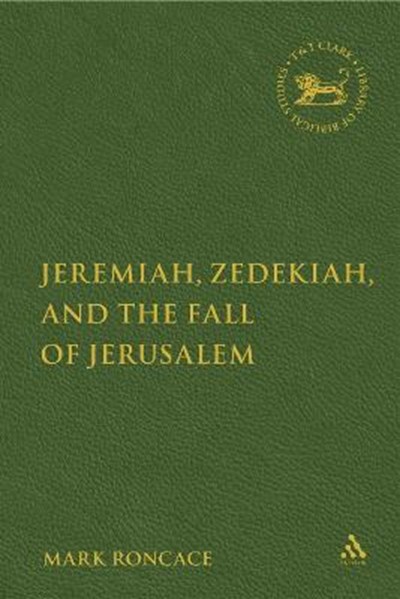 Jeremiah, Zedekiah, and the Fall of Jerusalem

A Study of Prophetic Narrative

QTY
Add to Basket
Publisher: Bloomsbury Publishing PLC
ISBN: 9780567026712
Number of Pages: 210
Published: 01/11/2005
Description Author Information Reviews
*Uses both a narratological and historical-critical method to read these specific passages of Jeremiah *Demonstrates that the story of Jeremiah and Zedekiah is not the typical god prophet/bad king story found in much of prophetic literature and the Deuteronomic History *Provides an intertextual reading of the passages which connects Jeremiah to other figures in the Old Testament The book offers a narratological and intertextual reading of Jeremiah 37:1-40:6, a text that features the dynamic interaction between the prophet Jeremiah and King Zedekiah in the context of events surrounding the fall of Jerusalem. While there have been many literary studies of biblical texts, there has been little such work on the narratives in the book of Jeremiah. This fact is surprising since the Jeremianic stories are narrated in a lively and sophisticated manner and contain complex characters and vivid dialogue and action, reminiscent of texts in the Primary History which have received much more literary attention. Roncace's book begins to uncover the richness of the prophetic narratives in Jeremiah. The study focuses on issues of characterization and point of view as well as the text's connections with other passages in the book of Jeremiah and those beyond it, particularly the Deuteronomistic History. Roncace argues that the text develops complex images of both Zedekiah and Jeremiah. It is not a story of the good prophet and the bad king; times as chaotic and confusing as the final days of Jerusalem do not call for a black-and-white story. Rather the text invites both sympathy and criticism for Jeremiah and Zedekiah. Jeremiah is the embattled prophet of God; yet at times he appears deceptive and manipulative, more concerned about his own well-being than that of the people, and his message can be ambiguous and in the end is not fully correct. Zedekiah, for his part, appears receptive to Jeremiah's word and protects the prophet from others who would harm him; yet he is too irresolute to take any action to save the city. The ambiguity in the portrayals of both figures is further developed by intertextual connections. Jeremiah can be compared to Moses, the Rabshakeh, Daniel, Joseph, Samuel, Nathan, and Micaiah, while Zedekiah can be compared to the monarchs that correspond to these figures (Pharaoh, Hezekiah, Saul, David, and Ahab).

Mark Roncace is Assistant Professor of Religion at Wingate University in Wingate, North Carolina. He has published articles on a variety of subjects, and is the co-editor of Teaching the Bible: Practical Strategies for Classroom Instruction.

"This book is recommended to all who continue to make the prophetic literature their scholarly home and to those biblical scholars studying outside the prophets who like a good narrative." Tyler Mayfield, Claremont Graduate University, Religious Studies Review