A Comparison with the Alexandrian Tradition: Acts 13.1-18.23 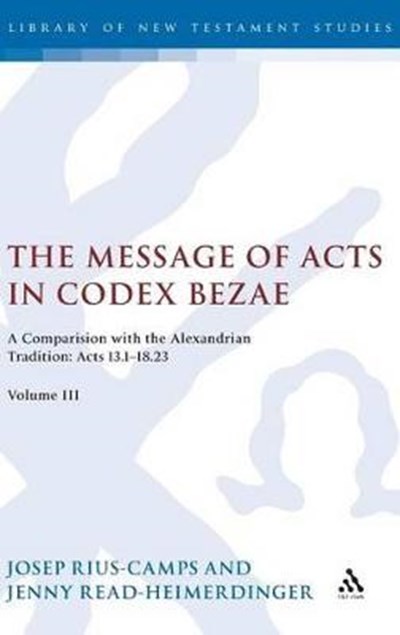 A Comparison with the Alexandrian Tradition: Acts 13.1-18.23

QTY
Add to Basket
Publisher: Bloomsbury Publishing PLC
ISBN: 9780567032485
Number of Pages: 416
Published: 13/09/2007
Width: 15.6 cm
Height: 23.4 cm
Description Author Information Reviews
The third volume in the four-volume commentary on the "Book of Acts", this work presents a fresh look at the text of "Codex Bezae" and compares its message with that of the more familiar Alexandrian text of which Codex Vaticanus is taken as a representative. It deals with Acts 13.1-18.23, the chapters that cover the first two stages of the mission to the Gentiles, with the intervening meeting in Jerusalem (14.28-15.41). For each section, there is a side by side translation of the Bezan and Vaticanus manuscripts, followed by a full critical apparatus which deals with more technical matters, and finally, a commentary which explores in detail the differences in the message of the two texts. Of particular interest in this part of Acts are the person of Paul and the unfolding of his character and theology. It is found that in the Bezan text Luke portrays him as a fallible disciple of Jesus who, despite his powerful enthusiasm, is hindered by his traditional Jewish understanding from fully carrying out the mission entrusted to him in these first stages. The conclusion is drawn that the portrait of an exemplary hero in the Alexandrian text is a later modification of the flawed picture. Formerly the "Journal for the Study of the New Testament Supplement", a book series that explores the many aspects of New Testament study including historical perspectives, social-scientific and literary theory, and theological, cultural and contextual approaches. "The Early Christianity in Context" series, a part of "JSNTS", examines the birth and development of early Christianity up to the end of the third century CE. The series places Christianity in its social, cultural, political and economic context. European Seminar on Christian Origins is also part of "JSNTS". "Journal for the Study of the Historical Jesus Supplement" is also part of "JSNTS".

Josep Rius-Camps is Priest of the Diocese of Barcelona and Lecturer at the Facultat de Teologia in Barcelona. Jenny Read-Heimerdinger is part-time Lecturer in Greek at the University of Wales, Bangor.

"Even if one believes the textual history implied by this view of Bezae to be extraordinarily improbable, one need not accept either their perspective or conclusions to enjoy, appreciate, and learn from their close reading of two versions of Acts." Religious Studies Review, September 2009