Feminist Revision and the Bible 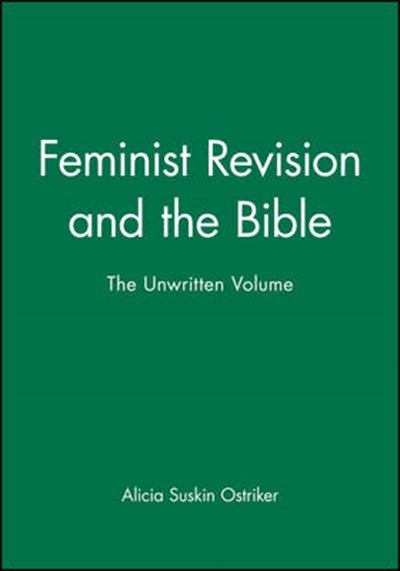 Feminist Revision and the Bible

Publisher: John Wiley and Sons Ltd
ISBN: 9780631187981
Number of Pages: 160
Published: 17/12/1992
Width: 14 cm
Height: 21.6 cm
Description Author Information Reviews
What happens when women writers imagine culture? What is the relation of the feminist writer to the male tradition? Feminist Revision and the Bible extends the feminist examination of western literature to the founding document of patriarchal culture, the Bible. At the same time, it re-thinks certain customary assumptions about feminism and about the Bible, in the light of poetic 'readings' of biblical texts by 19th and 20th century women writers.Modern biblical criticism recognizes that scripture has at no moment in history been a unified monolithic text, has always been radically composite, plurally authored, multiply motivated. But these insights have not been applied to issues of gender. Mainstream feminist theory, on the other hand, with few exceptions tends to treat patriarchal texts as uniformly antagonistic to women and femaleness. Feminist Revision and the Bible proposes that women writers relate to the Bible in complex ways which both critique biblical misogyny and stem directly from elements of transgressive writing within the biblical text, suggesting that feminist reinterpretations of the Bible constitute an inevitable consequence of radical spiritual values at the core of scripture itself.

Alicia Ostriker is the author of seven volumes of poetry, as well as Vision and Verse in William Blake and an annotated edition of Blake's Complete Poems. Her work as a feminist critic includes Writing like a Woman and the widely influential and controversial Stealing the Language: The Emergence of Women's Poetry in America.