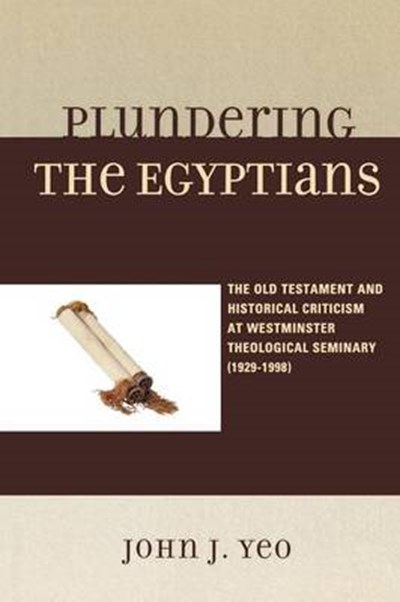 eBook FAQ
Add to Basket
Publisher: University Press of America
ISBN: 9780761849599
Number of Pages: 328
Published: 16/01/2010
Width: 15.7 cm
Height: 23.4 cm
Description Author Information Reviews
Plundering the Egyptians focuses on the study of the Old Testament at Westminster Theological Seminary from 1929 to 1998. More specifically, it presents the lives and academic labors of Robert Dick Wilson (1929-1930), Edward Joseph Young (1936-1968), Raymond Bryan Dillard (1969-1993), and Tremper Longman III (1981-1998). These featured scholars were highly influential in changing the shape of Old Testament studies at Westminster through the introduction of novel scholarly tools and ideas that reveal methodological and theological development. Their individual historical contexts, scholarly contributions, and interactions with historical-critical scholarship are presented and analyzed. Modifications in their respective methodologies are highlighted and often indicate significant shifts within the Old Princeton-Westminster trajectory from an anti-critical stance toward a position of openness toward historical-critical methodology and its conclusions. The implications of these shifts within Westminster are important because they mirror the current changes and challenges in evangelicalism today.

A well-structured and researched piece of work written in a pleasing style...an excellent job of absorbing and assessing the work of the Westminster faculty in a way that is sympathetic without lapsing into hagiography. -- Dr. Brian P. Irwin, assistant professor of Old Testament/Hebrew scriptures, Knox College, Toronto School of Theology, University of Toronto [This study is] crucial for understanding the way theological traditions develop and even diverge from the founding generation's original vision...particularly valuable for critics and defenders of recent changes at Westminster. -- Dr. D.G. Hart, author of The Lost Soul of American Protestantism An important study that is not merely an intellectual history. Though his study centers upon the Reformed tradition, it is of perennial importance for all evangelicals. He showcases the interaction between faith and critical scholarship...to see and understand more fully the interaction between the church and the academy, between faith and unbelief. -- Dr. J.V. Fesko, associate professor of systematic theology and academic dean, Westminster Seminary California, Escondido, California An invaluable backdrop to the current discussion of the interaction between confessional commitments and Biblical scholarship...Yeo shows how the nature of that response shifted over the period surveyed from a stance of strong antithesis to a more integrationist position, all the while seeking to uphold a conservative Reformed theology. -- Dr. Iain M. Duguid, professor of religion/Old Testament, Grove City College