Annotated Translation of the Odes, Litanies, and Encomia 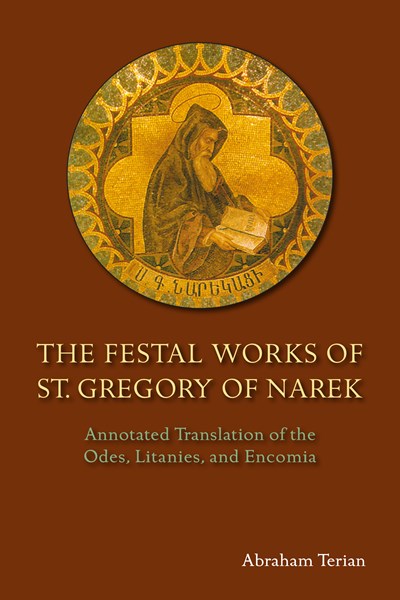 Annotated Translation of the Odes, Litanies, and Encomia

Join now Find out more
Publisher: Liturgical Press
ISBN: 9780814663189
Number of Pages: 464
Published: 08/03/2016
Width: 15.2 cm
Height: 22.9 cm
Description Author Information Reviews
"Saint Gregory of Narek, a monk of the tenth century, knew how to express the sentiments of your people more than anyone. He gave voice to the cry, which became a prayer of a sinful and sorrowful humanity, oppressed by the anguish of its powerlessness, but illuminated by the splendor of God's love and open to the hope of his salvific intervention, which is capable of transforming all things." -Pope Francis, April 12, 2015 This is the first translation in any language of the surviving corpus of the festal works of St. Gregory of Narek, a tenth-century Armenian mystic theologian and poet par excellence (d. 1003). Composed as liturgical works for the various Dominical and related feasts, these poetic writings are literary masterpieces in both lyrical verse and narrative. Unlike Gregory's better-known penitential prayers, these show a jubilant author in a celebratory mood. In this volume Abraham Terian, an eminent scholar of medieval Armenian literature, provides the nonspecialist reader with an illuminating translation of St. Gregory of Narek's festal works. Introducing each composition with an explanatory note, Terian places the works under consideration in their author's thought-world and in their tenth-century landscape.

Abraham Terian is professor emeritus of Armenian theology and patristics at St. Nersess Armenian Seminary, Armonk, New York. A recipient of the Fulbright Distinguished Chair in the Humanities award and Fellow of the National Academy of Sciences of the Republic of Armenia, he has extensive publications in the fields of Hellenistic, early Christian, and Armenian religious literature.