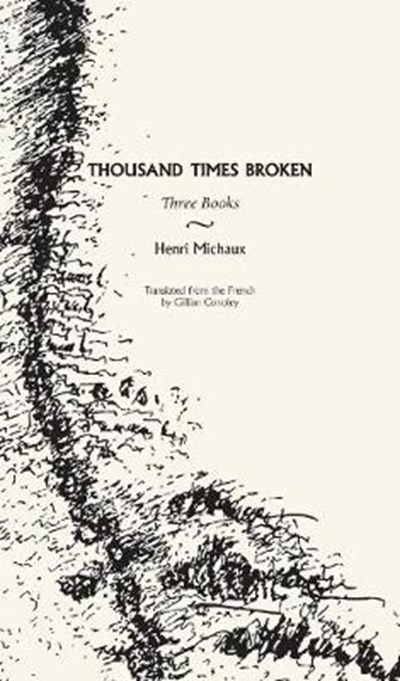 Publisher: City Lights Books
ISBN: 9780872866485
Number of Pages: 162
Published: 25/09/2014
Width: 12.7 cm
Height: 17.7 cm
Description Author Information Reviews
Thousand Times Broken brings together three extraordinary, previously untranslated books in which Henri Michaux's art and poetry merge in ways never seen before, composing a journey in which we----with the great visionary Michaux as our guide----are invited to hover between reading and looking, between the ineffable and the known, between body and spirit into a realm where it is possible to perceive "what one otherwise doesn't perceive, what one hardly suspects at all." Composed between 1956-1959, during Michaux's mescaline experiments, all three books engage a dynamic struggle between the mark and the word as Michaux searches for a medium up to the task of expressing the inexpressible. Included are Four Hundred Men on the Cross, a ghostly, enigmatic contemplation of Michaux's loss of faith, Peace in the Breaking, written under the influence of mescaline, its title poem of pure ascension sent flowing into the same spine-like furrows of Michaux's India ink drawings, and Watchtowers on Targets, a singular, automatic collaboration with surrealist and abstract expressionist painter Roberto Matta. Translated from the French by noted poet Gillian Conoley. Praise for Thousand Times Broken: "This is an invaluable addition to Michaux's works in English, filling an important gap with a vivid, vibrant linguistic performance."--Cole Swensen "In his quest for the inexpressible, Michaux represents the ultimate paradox, at once visionary mystic and rationalist, as he seeks to chart the journey without end. Gillian Conoley's skilled and vital translations, as well as her deeply illuminating commentaries on the three extraordinary volumes collected here, are indeed a revelation and a gift."--Michael Palmer "In Gillian Conoley's committed, devoted translation, with her thoughtful introduction, appear three visionary works from Henri Michaux. Michaux's turbulent but nuanced struggle with the cosmic defamiliarization of verbal and visual art registers risk wherein alphabetical signs become marks or figures, and figures become signs, become words."--Norma Cole "In these three remarkable works from the late fifties, in which the activity of inscription inhabits the abstract mark as well as the signifying word, Michaux "perceived what one otherwise doesn't perceive, what one hardly suspects if at all." Now, through Gillian Conoley's impassioned translation, Anglophone readers can perceive it too."--Barry Schwabsky, poet and critic for The Nation About the Author: One of the most influential French writers and visual artists of the twentieth century, Henri Michaux was known for his explorations of perception and consciousness. Gillian Conoley is the author of seven books of poetry and edits the long-running journal Volt.

Henri Michaux: One of the most influential French writers and visual artists of the twentieth century, Belgian-born Henri Michaux (1899-1984) was known for his continual journeys into perception and consciousness. Throughout the almost sixty years of his creative life, Michaux published over thirty books of poems, narratives, essays, travelogues, journals and drawings. His visual work was shown in central museums of Europe and the United States, including the Guggenheim in New York and the National Museum in Paris. In 1960 he was awarded the Einaud Prize at the Biennale in Venice. Five years later, he refused the French Grand Prize for Letters as a protest against the award culture in the arts. Throughout both his visual and literary work, one can trace the struggle for, and his disappointment in not finding, a universal language through gesture, mark, sign, and the word. Gillian Conoley: Gillian Conoley was born in Austin Texas. She is the author of seven collections of poetry. Editor and founder of Volt magazine, she is Professor and Poet-in-Residence at Sonoma State University. She lives with her family in a small town just north of San Francisco.