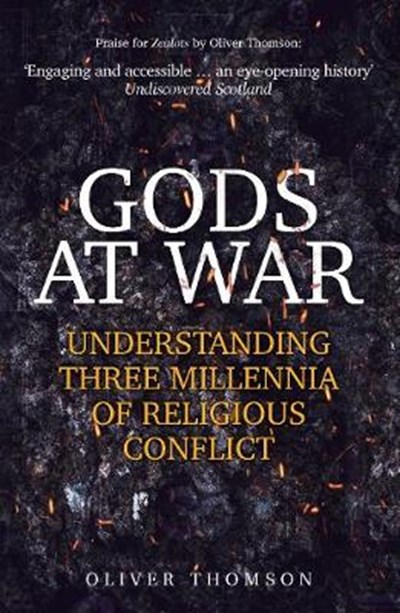 QTY
Add to Basket
Publisher: Amberley Publishing
ISBN: 9781445694719
Published: 15/08/2019
Description Author Information Reviews
Gods at War examines the role played by religions in starting or supporting wars from ancient Egypt and Israel to the current conflicts in Yemen and the Ukraine. It not only analyses the traditionally recognised wars of religion such as the Crusades and the Thirty Years War and the many Islamic jihads, but also addresses the role played by nearly all religions in encouraging warrior kings, dictators and even democracies to wage wars, supporting them with money, promises of paradise in the after-life, guarantees of victory (God is on their side) and ceremonial to keep up morale. Onward Christian Soldiers. Oliver Thomson assesses the level of religious involvement in wars, including less obvious ones such as the attempted invasion of the Spanish Armada, the French Revolutionary Wars, and the Japanese War in the Pacific; the prime minister of Japan who launched the attack on Pearl Harbor was a devout Buddhist. There are examples of wars inspired by Judaism, rival Christian and Muslim sects, Sikhism and Japanese Shinto. The first section of the book discusses several different types of religious influence in conflicts, ranging from almost purely religious wars like the French or German wars of religion, to the many others where religion only played a supportive but still significant role. It also explores the reasons why religious sanction has been welcomed by war leaders and why religions chose to cooperate. Distinctions are drawn between the documented faith of each religion and its manipulation by its leaders when it suited them. Four main sections cover wars from the pre-Christian era, the Middle Ages, the early modern period and finally the conflicts of the twenty-first century, including the use made of the Russian church by Vladimir Putin, of Sunni Islam by Mohammed bin Salman - even of Pentecostalism in Guatemala.

Oliver Thomson read history at Cambridge and later added a PhD at Glasgow University, where he has been a part-time lecturer for many years. His main career was in the advertising industry. He has written over a dozen books, many of which focus on propaganda and mass manipulation leading to oppressive governments and unnecessary wars. They include 'Easily Led: a History of Propaganda' and for Amberley 'The Impossible Bourbons', 'The Other Kaisers' and 'Zealots', an investigation into the religious roots of the Scottish and English Civil Wars. Several of his books have appeared in Japanese and Portuguese translation.