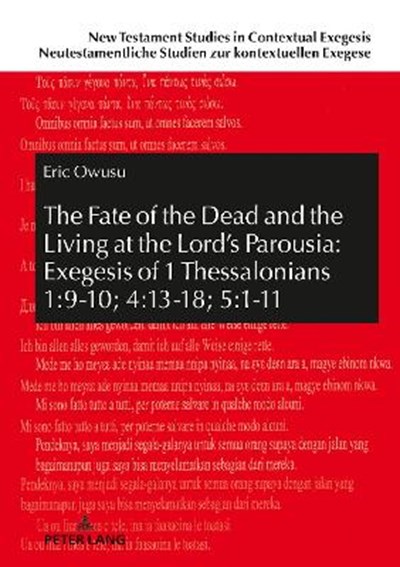 eBook FAQ
Add to Basket
Publisher: Peter Lang AG
ISBN: 9783631850626
Number of Pages: 490
Published: 05/10/2021
Width: 14.8 cm
Height: 21 cm
Description Author Information Reviews
This book traces the roots of the Christian belief in resurrection and the afterlife as presented by Paul in First Thessalonians. The Ghanaian author adopted mainly the approach of History of Religion (Religionsgeschichte) to his study of the Pauline exhortations on the fate of the dead and the living at the Lord's parousia in First Thessalonians. He is of the view that neither the African Traditional Religion nor ancient Greek philosophy and mythology can give the background information on the Pauline exhortations in question but Paul's origin as a Jewish Pharisee who believed in the resurrection of the dead and valued this belief he inherited from Judaism. The publication can help believers in Christ see death as an event which paves the way for them to begin a new life with God, their creator.

Eric Owusu finished his philosophical and theological studies at St. Paul's Major Seminary (Accra, Ghana) and St. Peter's Regional Seminary (Cape Coast, Ghana) respectively. He was then sent by his bishop to Germany to further his theological studies at the Jesuits' College: Philosophisch-Theologische Hochschule Sankt Georgen in Frankfurt am Main where he completed his licence (or master's degree) and PhD in New Testament Exegesis.