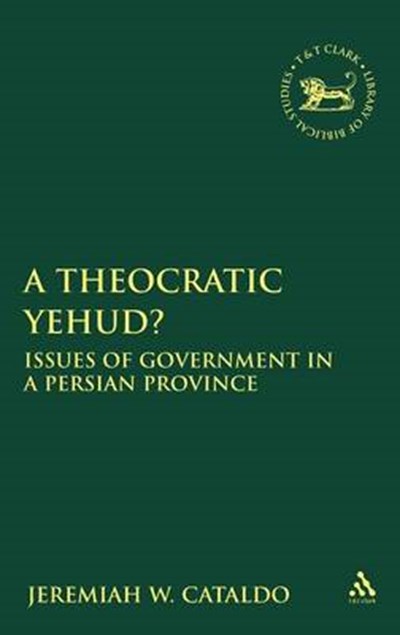 QTY
Add to Basket
Publisher: Bloomsbury Publishing PLC
ISBN: 9780567599346
Number of Pages: 240
Published: 01/05/2009
Description Author Information Reviews
This book offers a fresh re-evaluation of Yehud in the Persian period, addressing in particular the dynamics of its relationship to the Persian imperial government. Among the variety of social-political reconstructions of Persian-period Yehud, one 'consensus' stands out - one which states that the Jerusalem priesthood enjoyed a prominent level of authority, symbolized in the Jerusalem temple. Unfortunately, this leads easily into conclusions of a theocracy in Yehud. The problem, in part, is due to the immediate association of priests assumed to be authoritative with that of a theocratic governing structure.To address this problem, at least three aspects of Yehud's governing structure(s) require further attention: the social implications of a particular governing structure within a society; the developments of a society leading up to that governing structure; and, a clearly articulated definition of the term and concept of theocracy. Since many scholars appear to depend upon a theocratic 'structure' or 'spirit' at some point in their discussions of Persian-period Yehud, one would usually expect to find a clear definition of theocracy. Instead, a hasty and ill-equipped definition that seems to avoid addressing the social and political complexities is often used.The conclusion is that no power or political vacuum appears to have existed allowing the priesthood to claim power in Yehud. The Persian empire did not allow territories to develop autonomous governing structures (Chapter 2). The social, economic, and political realms of Yehud functioned within the framework of Persian imperial administration (Chapter 3). And the term theocracy, when defined according to social-scientific requirements (Chapter 4), does not accurately describe the social-political context of Yehud during the Persian period (Chapter 5).