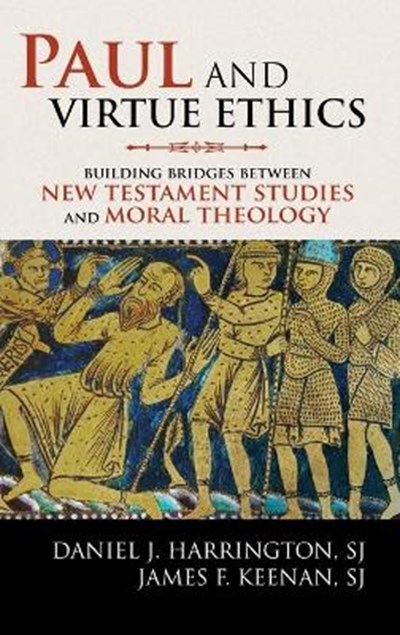 eBook FAQ
Add to Basket
Publisher: Rowman & Littlefield
ISBN: 9780742599598
Number of Pages: 240
Published: 16/11/2010
Width: 16.2 cm
Height: 24 cm
Description Author Information Reviews
In Paul and Virtue Ethics, Daniel Harrington and James Keenan build upon their successful collaboration Jesus and Virtue Ethics to discuss the apostle Paul's teachings as a guide to interpret theology and ethics today. Examining Paul's writings, the authors investigate what they teach about the basic questions of virtue ethics: Who am I? Who do I want to become? And how do I get there? Their intent is not to provide stringent rules, but to awaken discovery and encourage dialogue. The book first considers the concept of virtue ethics, an approach to ethics that emphasizes moral character, and Paul's ethics in particular. Next, the authors focus on the virtues of faith, love/charity, and hope as treated by Paul and Thomas Aquinas. Closing the book with reflections on the roles of other virtues (and vices) in individual and communal Christian life, the authors discuss various issues in social ethics and sexual morality as they are dealt with in Paul and in Christian virtue ethics today.

Daniel J. Harrington, SJ, was professor of New Testament at the Boston College School of Theology and Ministry. He was the author of a number of books, including How Do Catholics Read the Bible? and, with James F. Keenan, Jesus and Virtue Ethics. James F. Keenan, SJ, holds the Canisius Chair at Boston College and is director of the Jesuit Institute. He is the author or editor of sixteen books, including Moral Wisdom: Lessons and Texts from the Catholic Tradition and Ethics of the Word: Voices in the Catholic Church Today.

One could not ask for better guides through Paul and virtue ethics than we have in Harrington and Keenan. The clarity of their exposition and comprehensive grasp of their fields makes this book a welcome resource for any student of Paul and virtue. Theological Studies By using virtue ethics to read Paul and by using Paul to understand virtue ethics, two prestigious scholars in their respective fields serve up a gourmet banquet that blends the flavors of scripture and ethics without losing the distinctive tastes of each. Beginners will be delighted and specialists impressed with how Harrington and Keenan put scripture and ethics in critical dialogue with each other with such facility of style. This is a book for theology students and pastors who want a better grasp of the developing theological trend in virtue ethics. It is also a book for anyone who cares about living virtuously in a serious way. -- Richard M. Gula, professor of moral theology, Franciscan School of Theology/Graduate Theological Union For many years, Theologians and Exegetes have recognized the need to bridge the gap between exegesis and moral theology, but few have undertaken the task. Bringing the moral teaching of Paul and contemporary virtue ethics into dialogue with each other, Harrington and Keenan have done what others have only spoken about. Their work provides a model for developing moral theology in light of the Biblical text, and exegeting the Biblical text in light of contemporary moral theology. -- Frank J. Matera, The Andrew-Kelly-Ryan Professor of Biblical Studies, The Catholic University of America Catholic moral theologians are often taken to task, with some justice, for our unwillingness to engage with the theological and scriptural roots of our discipline. At the same time, recent biblical scholarship is a forbidding field for the outsider, relying as it does on a range of historical and linguistic skills that most theologians do not possess. This is one area in which interdisciplinary work is badly needed, and so this recent book by two eminent Jesuit scholars, specializing in New Testament studies and moral theology, offers a timely contribution to both fields. Written in a clear and engaging style, it comes across as a conversation between two scholars engaged in an open-ended, exploratory conversation on issues of mutual concern. While this book is intended, in part, for classroom use, its greatest contribution may well be the way in which it models and invites further interdisciplinary work among theologically minded biblical scholars, and theologians who are attentive to the scriptural roots of our faith. -- Jean Porter Who am I?, What do I want to become?, and How do I get there? All Christians ask these questions in light of our redemption in Jesus Christ, and no Christians has ever asked them more searchingly than St. Paul. In this deeply learned yet broadly accessible volume, Harrington (a New Testament scholar) and Keenan (a moral theologian) address these questions by forging a fruitful partnership between virtue theory and Pauline studies. They shed new light on questions ranging from the meaning of charity, to the role of the Eucharist in building up virtue, to practical matters of social and sexual ethics. It is a perfect book for an introductory course in theological ethics. -- M. Cathleen Kaveny, John P. Murphy Foundation Professor of Law and Professor of Theology, University of Notre Dame In academic circles one often hears the buzz word 'inter-disciplinary.' The frequency of the word, unfortunately, rarely guarantees the realization of the value intended. Here in Paul and Virtue Ethics, we have a true model of what inter-disciplinary research should be. Two acknowledged experts in their respective fields, Daniel Harrington and James Keenan, have truly collaborated in a serious effort to grasp Paul's ethical message in his own time and place and then to bring it into dialogue with later Christian moral theology, notably that of Augustine and Aquinas. One could not ask for better guides in a complicated and contested field. -- John P. Meier, Warren Chair Professor of Theology, University of Notre Dame