Imagery of Triumph and Rebellion in 2 Corinthians 2:14-17 and Elsewhere in the Epistle 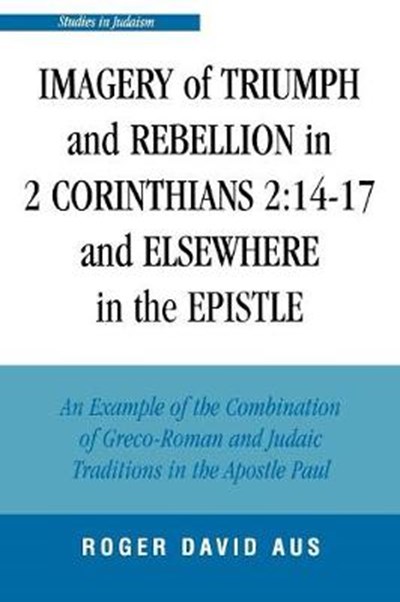 Imagery of Triumph and Rebellion in 2 Corinthians 2:14-17 and Elsewhere in the Epistle

QTY
Add to Basket
Publisher: University Press of America
ISBN: 9780761833215
Number of Pages: 116
Published: 10/01/2006
Width: 18 cm
Height: 22.8 cm
Description Author Information Reviews
In contrast to common opinion, Roger David Aus explores the positive aspects of the Apostle Paul's use of the image of 'triumphing' in Second Corinthians 2:14. Through detailed analysis of both Greco-Roman and Judaic texts, this exciting new work completely revises recent interpretations of this decisive passage. Aus illuminates it with expert precision and identifies the roots of imagery such as the 'triumphal procession in Christ,' 'fragrance of the knowledge of him,' and the 'aroma of Christ.' The origin of these and other images in verses 14-17 is found in both the Roman custom of a victorious general's leading a triumphal procession through the city of Rome, and in Judaic interpretation of the famous rebellion of Numbers 17:6-15 (English 16:41-50). With great skill, Aus demonstrates here how the Hellenistic Jewish Christian Paul masterfully combines imagery from both Greco-Roman and Judaic sources.

Dr. Roger David Aus is pastor emeritus of the Evangelical Luthergemeinde in Berlin, Germany. He received his Ph.D. in Biblical Studies from Yale University. The author of nine books on the New Testament, he is a member of the Society of New Testament Studies and the Society of Biblical Literature.

A real testimonium eruditionis-highly recommendable. -- Martin Hengel, Professor Emeritus, University of Tubingen Aus...focuses on two types of imagery in Second Corinthians 2:14-17, first that of 'triumph' and then that of 'rebellion'...shows in an exemplary manner that though Paul had become a Christian, he also remained a Hellenistic Jew. New Testament Abstracts Based on research on ancient sources, this is a valuable historical study. Studies In Judaism As ever with Aus, there are always plenty of new things for the reader to learn, especially with his typically impressive array of rabbinic interpretations...Ultimately, there are few scholars who can match Aus's proficiency in both rabbinic sources and the NT texts, coupled with a genuinely critical attitude...Is it really worth the risk for historically and literary minded scholars to ignore Aus's profound expertise in such areas any longer? Review of Biblical Literature Like the Apostle himself, Aus recognizes no hard boundaries between Greco-Roman and Jewish traditions. Casting his fine-meshed net into both seas, he has brought forth a multitude of unexpected insights into one of the most perplexing passages in the Pauline corpus. -- Wayne Meeks, Yale University