A Dilemma for Democracy 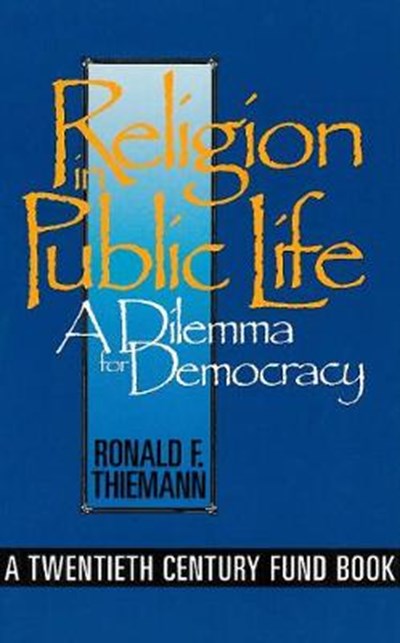 A Dilemma for Democracy

Publisher: Georgetown University Press
ISBN: 9780878406104
Number of Pages: 200
Published: 01/01/1996
Width: 15.2 cm
Height: 22.9 cm
Description Author Information Reviews
Prayer in public schools, abortion, gay and lesbian rights - these bitterly divisive issues dominate American politics today, revealing deep disagreements over basic moral values. In a highly readable account that draws on legal arguments, political theory, and philosophy, Ronald F. Thiemann explores the proper role of religious convictions in American public life. He proposes that religion can and should play an active, positive part in our society even as it maintains a fundamental commitment to pluralist, democratic values. Arguing that both increased secularism and growing religious diversity since the 1960s have fragmented commonly held values, Thiemann observes that there has been an historical ambivalence in American attitudes towards religion in public life. He proposes abandoning the idea of an absolute wall between church and state and all the conceptual framework built around that concept in interpreting the first amendment. He returns instead to James Madison's views and the Constitutional principles of liberty, equality, and toleration. Refuting both political liberalism (as too secular) and communitarianism (as failing to meet the challenge of pluralism), Thiemann offers a new definition of liberalism that gives religions a voice in the public sphere as long as they heed the Constitutional principles of liberty, equality, and toleration or mutual respect. The American republic, Thiemann notes, is a constantly evolving experiment in constructing a pluralistic society from its many particular communities. Religion can act as a positive force in its moral renewal, by helping to shape common cultural values. All those interested in finding solutions to today's divisive political discord, in finding ways to disagree civilly in a democracy, and in exploring the extent to which religious convictions should shape the development of public policies will find that this book offers an important new direction for religion and the nation.

Ronald F. Thiemann is a professor of Theology and of Religion & Society at Harvard Divinity School. He is author of Toward an American Public Theology: The Church in a Pluralistic Culture (Westminster-John Knox Press, 1991) and Revelation and Theology: The Gospel as Narrated Promise (University of Notre Dame Press, 1985).

"Rich in probing distinctions and fresh terms for improving the precision of public debate over the separations and relations of religion and politics in modern America." -- Theology Today